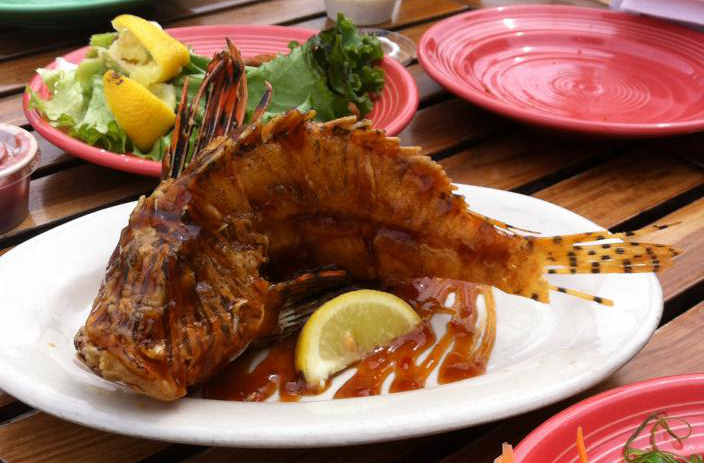 A bright, colorful fish with poisonous spines, lionfish are native to Indonesia, but were first spotted off the Florida coast in 1985.  With only a precious few natural predators to keep the species in check, this invasive lionfish population has exploded, conquering the Atlantic, the Caribbean, and the Gulf of Mexico. Lionfish are currently found as far north as Rhode Island all the way down to Panama and Venezuela.

Researchers from Oregon State University referred to the fish as a “terminator” sort of predator, staying in one area to devour smaller fish and mollusks — often until the local population goes extinct. This is disastrous for local favorites such as baby grouper, baby snapper, baby lobster, and many more.

Unfortunately, the lionfish problem isn’t going away. In fact, it’s getting worse! A recent NOAA study found that warming water temperatures due to climate change will only expand the range of tropical fish, including the invasive and poisonous lionfish.

The good news here is: You can help!

The lionfish has proven to be difficult to kill, but the NOAA, researchers, and concerned members of the marine community are coming up with a few ideas for curbing the lionfish’s takeover. From calling on locals to report sightings of lionfish and training sharks to go after them, probably the most effective way to reduce their population is to hunt and eat them ourselves! While the spines are poisonous to humans, the meat of the fish is perfectly harmless.

Restaurants all along the Atlantic coast, including Grill’s Seafood Deck in Port Canaveral, have added lionfish to their menus in an effort to incentivize the fishing of lionfish, and, surprisingly, they’re quite tasty! The white, flaky, mild meat has been met with very positive responses from local Port Canaveral seafood lovers.

Port Canaveral has an environmental initiative underway to study and remove invasive lionfish from the harbor. The Port Canaveral Lionfish Project, sponsored by the Indian River Lagoon National Estuary Program, aims to increase local awareness, assess the population of lionfish in the Port Canaveral area, and begin their removal from critical habitats. While lionfish within sensitive areas of the Port can only be harvested by specially credentialed divers, the public and commercial fisherman are encouraged to collect as many lionfish offshore as possible.

Care to Try Your Hand at Spearfishing?

Florida fisherman have attested to the excitement and fun that comes with the primal act of spearing a fish right out of the water. If nothing else, this might just become your next thrilling recreational hobby!

If you spot one while offshore, remove it from the water, either by spearfishing, or using a handheld net. You do not need a license to fish for lionfish when targeting them with a pole spear, Hawaiian Sling, handheld net or any spearing device.

Bonus: At the end of the month, the Florida Fish and Wildlife Conservation Commission will allow fishermen to take one extra spiny lobster each day during the two-day sport season this summer (July 29-30), provided that they also harvest 10 lionfish. This incentive is for the 2015 season only.

For some great info on catching lionfish using hand nets, safe handling practices, lionfish recipes, where to sell them and more, click here.