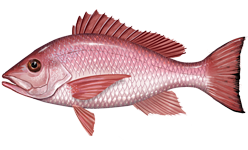 For Harbortown Marina – Canaveral Residents and Visitors, as well as any angler preparing to enjoy the mini season, here are a few things to know before heading out:

While a Red Snapper mini season has been approved, there are still limitations to the amount that can be caught. For recreational fishing, a limit of 1 fish per person/day has been set. There is no limit based on the size of fish.

2. Data may be Requested.

The approval of a Red Snapper mini season offers many benefits, one of which includes data collection by state marine resources. Throughout the mini season, anglers are encouraged to cooperate with any state personnel conducting research. Once Red Snapper fillets have been removed, state staff could request the carcass for sampling. State staff are expected to be collecting data dockside and anglers are encouraged to work with staff.

An amendment has recently passed allowing the process which decides an annual catch limit to be revised, with the purpose being to allow a Red Snapper mini season in 2018. If approved, anglers can expect 2018’s recreational Red Snapper season to open on July 13th, 2018. Catch rates for 2018 will be based on data collected during 2017. Harbortown Marina – Canaveral will be sure to update this page when 2018 dates have been confirmed.

We are excited for all Florida anglers who plan on enjoying this Red Snapper mini season, and we suggest starting your day out on the water from Harbortown Marina – Canaveral! Fill up your vessel with the lowest priced ethanol – free fuel on the Space Coast, grab any last minute supplies from our fully stocked marina store, and enjoy your day out on the water!